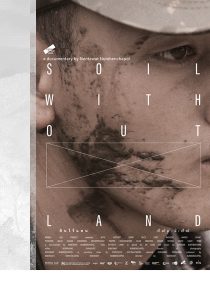 For over 50 years, a civil war has waged between the Shan, Burma’s largest ethnic minority group, and the Burmese military. As a small child, Jai Sang Lod, his family, and many other Shan families fled to a Shan State Army (SSA) governed village sitting between the borders of Burma and Northern Thailand. Living in a disputed land, undefined as a state, Sang Lod and his family were stuck in the village without any ID or passport.

As the village authority, the SSA ordered a mandatory military training for all young men. Leaving his family behind, Jai Sang Lod must learn to be a soldier with a lifetime duty to fight for Shan sovereignty and liberation from the Burmese military.

Under the burning sun, the training officer lectures 100 young men on manhood and patriotism. Sang Lod trains alongside his comrades, with each command slowly molding these boys from their peaceful young selves to rifle wielding uniformed men.

In the same year Numbenchapol completed his second documentary BY THE RIVER, about the Klity villagers affected by water lead contamination. It became the first Thai film to receive the Special Mention award from the Locarno International Film Festival.

In 2016 Numbenchapol created a hybrid docu-fiction #BKKY, a story of a teenage girl, “Jojo,” questioning life and identity. Jojo’s character is a compilation of 100 teenagers interviewed in Bangkok about their loves and dreams and coming-of-age just after graduating high school. It premiered in October 2016 at the Busan International Film Festival before it received the Jury Award for best feature-length film from Lesbisch Schwule Filmtage Hamburg, Germany.