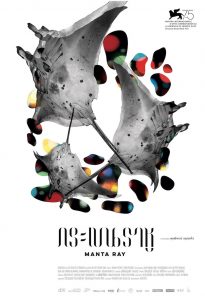 Near a coastal village of Thailand, by the sea where thousands of Rohingya refugees have drowned, a local fisherman finds an injured man lying unconscious in the forest. He rescues the stranger, who does not speak a word, offers him his friendship and names him Thongchai. But when the fisherman suddenly disappears at sea, Thongchai slowly begins to take over his friend’s life – his house, his job and his ex-wife…

Phuttiphong Aroonpheng (born 1976) studied fine arts at Bangkok’s Silpakorn University. His short films have screened in festivals including Busan, Rotterdam, Hamburg and Singapore. His 2015 short, Ferris Wheel, screened in over 20 festivals and received 10 awards. He participated in 2009 Asian Film Academy at Busan and was also selected one of Asian Public Intellectuals fellows by the Nippon Foundation. He also works extensively as cinematographer, with credits including Vanishing Point (dir. Jakrawal Nilthamrong), The Island Funeral (dir. Pimpaka Towira) and Dolphines (dir. Waleed Al-Shehhi).