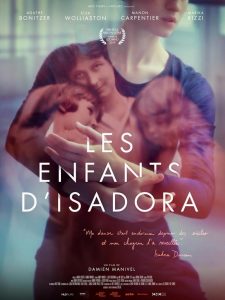 Following the death of her two children in April 1913, the legendary dancer, Isadora Duncan, created a farewell solo entitled “Mother” in which, in a moment of extreme tenderness, a mother cradles her child for the last time before letting him go. A century later, four women encounter the heartrending dance.

Damien Manivel started his artistic career as a dancer before turning to cinema. After studying in Le Fresnoy, he directed several awarded shorts, including The Lady with the Dog winner of the Jean Vigo Price. Since 2014 he has produced and directed four feature films presented in major festivals (Cannes, Locarno, Venise, San Sebastian…). With Isadora’s Children, selected in Locarno IFF for International Competition, Damien Manivel delivers his first film about dance.