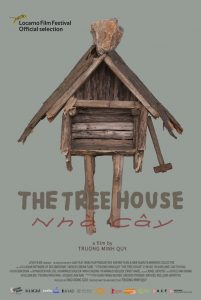 A man, a filmmaker maybe, lands on Mars in 2045. He tries to make a film about his new life in this new land but how could he make a film about a place where he has no memories of? All that he can remember is life on Earth. He remembers Hồ Văn Lang, a man who used to live for more than 40 years in the forest. He remembers Cao Thị Hậu, whose cave used to be her childhood home. He also remembers his father’s cooking, fried crickets, that he cooked for him when he was a child. “Home…Far away from home”, echoing the lyrics of an old song. Far from the forest. Far from the cave. Far from Vietnam. All the remaining images of the past gather in a collection of moving images that he is trying to realize.

Trương Minh Quý, 1990, was born in Buon Ma Thuot, a small city in the Central Highlands of Vietnam. In 2010 he quit Ho Chi Minh City College of Cinema and Theatre in his 2nd year to follow independent filmmaking. Quý lives and works here and there in the vibrancy of memories and present moments, his narratives and images, lying between documentary and fiction, personal and impersonal, draw on the landscape of his homeland, childhood memories, and the historical context of Vietnam. In his films, he has experimented with combining abstract concepts-images with realistic improvisations during shooting. His films have been selected for international film festivals and international exhibitions such as Clermont-Ferrand, Oberhausen, Rotterdam, Busan, VideoBrasil, Les Rencontres Internationales Paris&Berlin. He is the alumnus of 2012 AFA (Asian Film Academy, Busan International Film Festival) and 2016 Berlinale Talents (Berlin International Film Festival).